Rita gathers her thick mane of hair to the top of her head, analyzes her profile in the mirror from the left and then the right. Deciding against an updo, she lets it fall back down to her shoulders, the corkscrew curls bouncing into place. Only the cluster of springs at her temples and along her edges remain resilient, trying too hard to imitate bangs but appearing like an 80’s mullet gone bad instead. No amount of curl control gel will tame them, so she lets them spread out wildly across her forehead.

It looks cute—in a chic throwback rock sort of way. She hates cute, hasn’t been cute since her first training bra. But cute beats sexy, and the last thing she needs to be right now is sexy. Sexy always leads to her panties being tossed in a corner somewhere, her knees being separated for a temporary houseguest, and since her New Year’s Resolution for 2018 is to be celibate, sexy is no longer an option.

She can literally feel herself drying up between the legs as she thinks about it. It was only a month ago that she gave up smoking weed, but this, this is much harder, because she’s getting ready to go on a date with Hank, and Hank has touched places, kissed and licked parts of her body most men don’t get to see on the first date.

And it’s not only the date with Hank that’s got her anxious. What if it goes bad? She doesn’t want to fixate on whether or not he could be the one. She’s not even sure if she wants that now with so much change happening in her life. She isn’t the same person she was a week ago when she slept with him an hour after meeting him. If that’s what he’s hoping to get tonight, she hates to disappoint him, because she likes him, a lot, definitely more than just a one-night-stand.

She’s not a slut. She knows how it looks, with the way things started with Hank. But she doesn’t sleep around; it’s always with the same guy over and over again, until he grows tired of her. True, it’s usually some random guy she met at the bar, or online, or, when she’s really feeling low, Jerome. The affairs never last long, but they quell her of her temporary loneliness, and however brief, she can hide her pain underneath the pleasure she feels when that man, whoever he may be—a bar hopper, a Tender suitor, a weed dealer, a Home Depot employee— clings to her, pushes deep inside her, breathes heavy on her tongue.

She likes to be filled, wanted, needed, useful for something, even if it’s just a quick nut. Sex does that for her. It gives her a purpose, a release, an escape. She doesn’t know what she is without it.

Actually, she does know. Alone—that’s what she is—and she has a vague memory of a sad, stupid girl who quit medical school because some idiot broke her heart, left her in the dust his rear tires kicked up after he dropped off her clothes and $300 for an abortion.

It terrifies her that she could still be that girl. 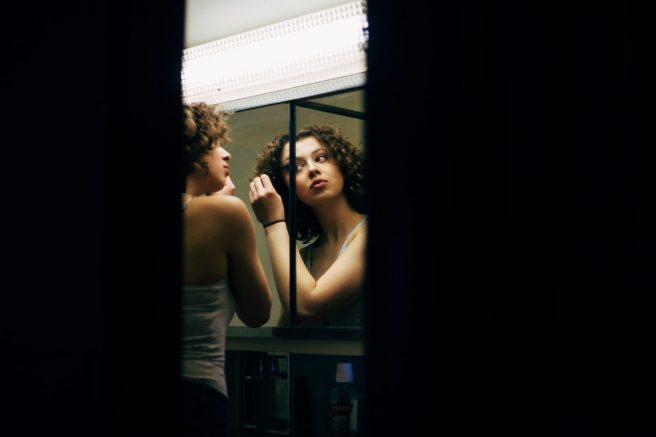 But just as she’s about to give up on her vow of celibacy before the New Year even starts, she is reminded of something Reverend Murphy said to her—that she has so much God-given potential bottled up inside her. Taped to the upper left corner of her mirror is a list of scriptures he gave her to read, to guide her through the beginning steps of salvation. She’s read a few of them. Jeremiah 29:11 —God has plans you. Romans 12:1-2 — Renew your mind. 1 Corinthians 6:18-20 — Your body is a temple for God. She’s heard Renee say that once. She thinks she’ll call her about it after her date with Hank. And she knows Tash has been through it—the struggle to be as perfect as you can yet still falling short. But she recovered. She got back up. She and Mitchell are happy, and married, and Rita would like to think their love is even stronger.

Even though they fell.

She checks the time. If she wants to meet Hank at the arcade by seven, she should be leaving now. He says he has a ride—a relief for her—it’ll be less tempting not having him in her car. It feels kind of childish, that he’s chosen video games as their first date over dinner, or a movie, reminds her again that he’s not yet old enough to drink, which might not be a bad thing since she’s given that up too.

Will this date end in something serious, or fizzle out like all the others? Rita can hope, but whether it’s Hank or any other man, she knows before she can consider a relationship, she has to discover her new self first, figure out who she is in Christ, which Reverend Murphy calls the most meaningful pursuit in life.

Tash is doing it, and Mitchell. Renee’s the best at it, and maybe one day she’ll get Bryan there as well. And Antonio, even Antonio is trying. Rita must try too. Fellowship, Reverend Murphy says, it’s the best thing any new Christian can have, Rita’s got that in her amazing group of friends who drive her crazy and inspire her all at the same time.

If things go south with Hank, she knows she can count on their support, that they will help her to get back on her feet and back on track in the direction she needs to be.

The final chapters of Countdown to 31 Days of Holiday Hooligans

——
Previous: Bedtime Story
Next: After the Wedding (Epilogue)

3 thoughts on “Countdown to 31 Days of Holiday Hooligans: First Date”