Ryder’s head feels like five pound weights lying across Antonio’s lap. His breathing is slow, constant. It didn’t take much to put him to sleep. Antonio had barely finished chapter one before the snoring began.

Snoring. His eighteen-month-old son snores. Nothing too loud and obnoxious, like the Chewbacca noises Elise swears she doesn’t make. It reminds Antonio of the sound a small handheld fan makes when the motor is about to go dead. The rise and fall of the boy’s breath sooths him, and he imagines it could be recorded as a sleep track for people who suffer from insomnia. It even starts to lull him, and for a brief moment he forgets that this is the first time he’s ever heard his son snore.

As much as he wants to, he can’t make himself hate Elise for this. Even though she’s tried so hard to keep him exiled from their lives, and for a split second at the wedding, he feared Ryder wouldn’t even recognize him—it’s been that long.

But when he walked into the Fellowship Hall, one of the first people to arrive after the ceremony, and spotted Elise and Ryder sitting alone at a table toward the back corner of the room in front of the “bar” that only served sparkling cider—though he’s pretty sure Bryan and some of the other guests were sipping on something a little stronger—Ryder jumped to his feet, ran—more like wobbled, he’d only learned to walk a month ago, another milestone Antonio missed—arms outstretched, screaming, “Daaaaaddddy!”

And for the third time, Antonio ugly cried, standing there in the middle of the Hall, holding his son as wedding guests filed in looking for their assigned seats. He wouldn’t credit that to Elise, but to Ryder, how much he loved him, how much he missed him.

“I will always fight for you,” he whispered in Ryder’s ear, squeezing him even tighter, as if he feared the boy would slip out of his hands.

Looking back on it, Antonio realizes he didn’t let Ryder go that entire day, not until he strapped him into the car seat to take him home. At the reception, he sat Ryder in his lap as they ate boneless chicken wings and red velvet cake. He held Ryder’s hand on the dance floor and taught him how to slide. He even took the diaper bag from Elise and changed Ryder in the bathroom, which proved tricky to do since men’s restrooms don’t have changing table.

It was the first time—yes, the first time—he’d ever changed his son’s diaper, and it was the stinkiest, wettest, fullest diaper if ever there was one. He wouldn’t doubt that Elise intentionally skipped a few changes just to spite him, but he didn’t care. He sat Ryder in the sink and wiped him down with a smile on his face, a pained smile, but a smile nonetheless.

With Ryder nearing two, he knew he wouldn’t have many more moments like this, and no amount of dirty diapers could make up for the eighteen-months worth he’d missed. So if this was the most disgusting diaper he had to touch, if his pinky finger accidently grazed the soil, if Ryder peed on him will he tried to get the new diaper on, if it resulted in a diaper rash, he’d welcome it all.

And when it’s time to potty train him, Antonio will show him how to aim, teach him to shoot from a distance, be a man. Elise can’t take that from him. He thought she could, but now he knows she can’t. And she can’t teach Ryder to be a man either, not like a man can, not like Antonio can. Now that he has Ryder, he’s always going to be there for him, won’t let months lapse between seeing his son again. He can’t be lazy anymore, blaming Elise for everything he doesn’t have with Ryder. There are enough lazy fathers in the world, who blame the mother for why they don’t have relationships with their children, when they themselves won’t make an effort. 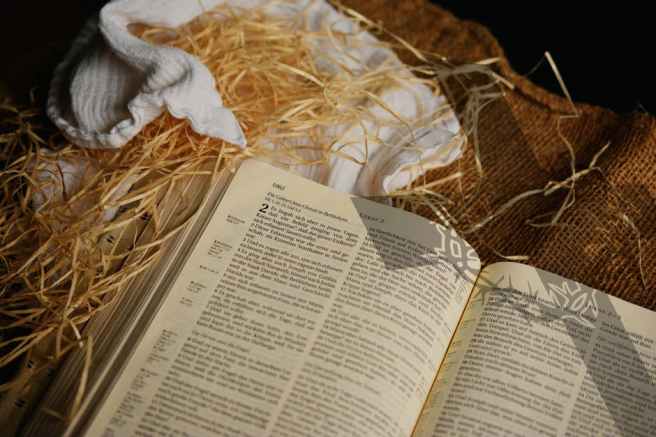 Antonio lightly pets the back of Ryder’s head, and Ryder snuggles closer to his leg. Antonio knows now he’ll always make an effort for Ryder, because he wants more nights like this—lying in bed reading bedtime stories.

And what better story than the original Christmas story? As many times as he’s heard it told, in movies, in songs, every Christmas Eve at Renee’s, he’s never actually read it himself. Now, though Ryder sleeps, he continues reading, fascinated by the whole thing—the virgin birth, the proclamation of the angels, the prophesy of the Messiah who came to save all people, His name, Immanuel, which means God with us.

Antonio’s only been saved a few weeks, has made a mess of it most of that time, but in the peace of his bedroom, Ryder by his side, the Word in his lap, he holds onto hope. The same hope of the shepherds, the wise men, the prophets, all who witnessed one little baby, born in a manger, who grew to change their lives, forever.

The final chapters of Countdown to 31 Days of Holiday Hooligans

——
Previous: Jesus is the Reason for the Season
Next: First Date

2 thoughts on “Countdown to 31 Days of Holiday Hooligans: Bedtime Story”