The team headed toward the island not sure what they would find when they arrived.

A race to the buoys anchored in the crystal blue waters just offshore of Miami had turned into two days adrift in the Bermuda Triangle. They’d run out of gas at the end of day one.

Everyone was dehydrated, tempted to drink the water on which they floated, only for the concentration of salt to further dry their tongues.

After vomiting three times into the Atlantic while straddling the back of Ryan’s jet ski, Misha had revealed to Thomas that she was seven weeks pregnant, and he in a fit of anger tackled Ryan into the ocean.

As they drew nearer to the island, the men abandoned the boats and swam for shore, towing the women behind on one boat while Misha doubled over, praying for food. 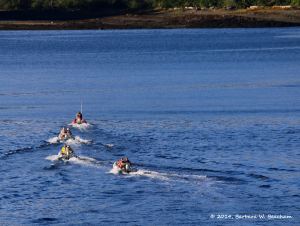 Like Sonya over at Only 100 Words, I’ve truly missed Barbara Beacham and her MFtS challenge. So as a way to remember her, I’ve decided to join Sonya and do all the prompts I missed, starting with the first one. 🙂

13 thoughts on “Revelations Lost at Sea”