Mrs. Johnson checked her wrist watch. Twenty past three. It had been snowing for almost 2 hours now. Looking out the window behind her, she could barely see the playground across the court through the thick white flakes of snow, falling in a slanted direction under the northeastern wind gusts.

Rake was sitting alone at her desk, flipping through the pages of Dr. Seuss’ The Lorax. Her thin jacket was zipped up to her chin, the hood pulled over her head. The pink straps of her Dora the Explorer backpack slid off her shoulders as she slouched in her chair and swung her feet—in pink and green polka dot rubber boots—back and forth.

“Maybe I should call your mom again?” Mrs. Johnson said.

Rake shrugged her shoulders. “She don’t get off work ’til six. She won’t be here ’til six.”

“Surely with the weather this bad—”

“Mama don’t like being called out early. She say it mess with her paycheck.”

What kind of mother, Mrs. Johnson thought. She sat her chin in her palm and drummed her fingers on her desk. Hank should be home with the boys by now. She picked up the framed picture of them at the beach last summer, Hank buried up to his neck in the sand, her youngest, Trey, balancing his red pail on top of his father’s head.

Why did the board even schedule school for today, knowing a foot of snow was in the forecast? It was bad enough they included Martin Luther King, Jr. Day as a snow make up day in the school calendar, having to make up last week’s snow fall. At this rate, the kids would be in school all through Spring Break, and possible deep into their summer vacation.

Mrs. Johnson looked out the window again. The roads were already treacherous. Another hour, and they’d have to spend the night at the school and more than likely freeze, as the heat was already struggling to stay on.

“Do you live far? Maybe I can drive you home?”

“Don’t got nobody to watch me.”

“Not a grandparent? Your father?”

Mrs. Johnson sighed. Is this what Dr. King’s dream has come to, she thought, innocent children being abandoned at the schools during a blizzard—the parents too poor to leave their minimum wage jobs to pick them up?

Mrs. Johnson took her coat and scarf from the coat hanger. “Come on. We’ll have a sleepover at my house.”

Rake closed her book and put it under her desk. She hopped from her chair and tightened the straps on her backpack.

Mrs. Johnson took her hand and lead her out of the classroom. “Do you like hot chocolate?” 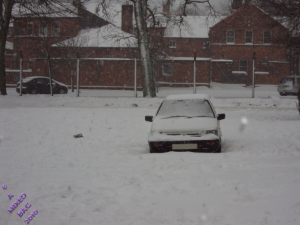 Sunday Photo Fiction is a weekly challenge for writers to create a 100-200-word story (I went over) using the provided photo prompt. Click the froggy icon to read other stories inspired by the photo.