“Texting and driving is against the law,” Malcolm’s dad said in his intimidatingly calm baritone voice.

A loud thud caused Malcolm to drop his cellphone in the crack between the seat and cup holder, and with both hands on the steering wheel, he swerved left to avoid colliding with a car pulling out into the intersection at the four-way stop.

“Pay attention! That car had the right-of-way.”

“What the heck was that?” Malcolm pulled to the side of the road, the right tires rolling up onto the curb. He slammed on the brakes and looked over the dashboard. A ball of fur the size of his fist lay motionless on the hood of the car.

“Squirrel must’ve fallen off the power lines,” his dad said.

“We should’ve taken the Benz.”

Malcolm stepped outside to scrape the dead animal into the street.

“You forgot to…” his dad yelled as the car accelerated forward and plowed into a bike leaning against the speed limit sign. 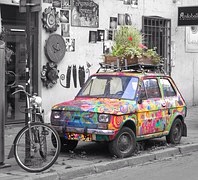 Flash Fiction for Aspiring Writers is a weekly challenge where you write a story in 100-150 words (give or take 25 words) using the provided photo prompt as inspiration.